The printed circuit board or PCB is designed in a controlled manner to connect different components in electrical devices. PCBs have different copper layers that are interconnected with each other, which defines the complexity of PCBs. They come in a different number of layers ranging from single and double up to twelve layers. Several layers increase the complexity and functionality of any PCB.

Single-layer and multiple-layer PCBs categorize based on their structure. Both types of PCBs are used in everyday life. The choice between a single-layer and multi-layer PCB must be made before designing a printed circuit board. Many commonplace devices employ both styles of design. Which one is ideal for you will depend on the type of project you are utilizing. Single-layer boards are for simpler devices, whereas multi-layer boards are more typical for complicated devices.

You can guess with the name of both PCBs what the distinction is between both PCBs. Single-layer PCBs only have one base material layer, while multi-layer boards have numerous layers. By thoroughly examining these boards’ designs and operations, you may see several changes in them. Today PCB is used in a wide range of electrical appliances made from one or more insulating layers. Here we will discuss single and multiple-layer PCB in detail.

Many essential electrical gadgets use single-layer PCBs. Single-layer PCBs comprise just one layer. They have a conductor design on one side and components on the other. One layer of conductive material is included on these PCBs. A substrate, a shielding solder layer, conductive metal layers, and a silkscreen make up a single-layer board.

There are many advantages of single-layer PCB, as mentioned below;

Although single-layer PCBs are easy to design and manufacture, they have some limitations, as discussed here.

Single-layer PCBs are still the top ones in many devices, but they are primarily used in simple devices to operate a single function. As discussed below, single-layer PCBs have been extensively used in many more superficial and complex machines. 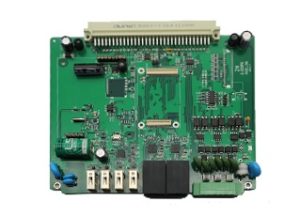 A multi-layer printed circuit board (PCB) contains more than two layers and at least three conducting copper or conductive material layers. The top and bottom layers of a multi-layer PCB resemble a double-sided PCB, but there are extra layers on both sides of the core. These layers join together by copper-plated holes. The top and bottom layers of the multi-layer PCB are used to mount the active and passive components, and the interior stacked layers mainly use for routing.

The first step of manufacturing a multi-layer PCB is to prepare the board design. The next step is to decide inner layer core and then laminate using copper foil sheets. Then apply heat, vacuum, and pressure to make sure that there is no air between layers.

Multi-layer PCBs with a high layer count need thin dielectric, which results in tight coupling between the layers by default. They frequently function better in EMI performance and signal integrity in high-speed electronics. To account for the minimum thickness of the materials used, the board thickness must also increase as the layer thickness does.

A PCB board substrate that has been properly constructed can effectively lower crosstalk and electromagnetic emissions while also enhancing signal integrity to deliver low inductance power. Compared to double-sided boards, the proper design of multi-layer PCBs can boost immunity to RF fields by ten or more.

Although multi-layer PCBs are advanced and complex and require experts to design them, these have many advantages, as mentioned here.

As discussed here, there are also many drawbacks to manufacturing and designing multi-layer PCBs.

Multilayer PCBs use day-to-day devices to improve electronics’ performance and efficiency. Multilayer PCBs are widely used today in various electrical appliances, with several layers ranging from four to twelve. Some of the main applications of multi-layer PCBs are discussed here.

You need to select PCB according to your demands. You can use a single-layer PCB if you want a cheap and quickly produced PCB suitable for simple devices. It would help if you kept in mind the pros and cons of single-layer PCB e.g., cost, time, high volume, and simple design will give you an advantage but this is not suitable for more complex and powerful devices as it has lower power and speeds as compared to multi-layer PCBs. Suppose you need to operate a more complex and more extensive project. In that case, you must go for a multi-layer PCB as it is more powerful, durable, flexible, multifunctional, has a single connection point, and is lightweight. However, multi-layer PCBs will be costly, require more complicated designs and repairs, and require more production time. That’s why they are limited.